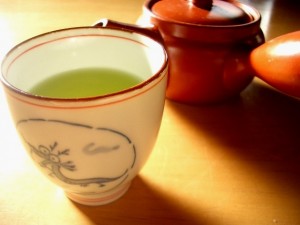 Reading This Over A Cup Of Coffee?

Next time, try green tea. A number of recent studies have shown some varieties of tea may help prevent cancer and other disorders. Camellia Sinensis, the tea plant, is indigenous to both China and parts of India. Wild tea plants can grow 90 feet and above. In the past monkeys were trained to pick tea leaves and throw them down where they were collected.

Today tea plants are cultivated as a plantation crop and therefore the plants are kept to a height of about three feet, for easy picking. There are over 2000 varieties of tea. Although tea is produced in more than 25 countries, the major producers include China, India, Indonesia, Kenya, Malawi, and Sri Lanka.

It was during China’s Tang Dynasty [6816-906 B.C.] that tea became the national beverage of choice. Buddhist priests are thought to have been responsible for spreading the cultivation of tea throughout China and Japan. The three main categories of tea are black, green, and oolong. Within each of these categories there are many varieties. Black and green teas come from the same tea plant species, the difference being the processing procedure that each tea undergoes. Black tea undergo several hours of oxidation before drying. Green tea is steamed immediately after picking to stop oxidation. Oolong (green/black) tea is partially fermented to preserve some of green teas’ delicate flavor and add richer flavor of black tea. Teas are flavored with variety of dried fruits and citrus oils. Most popular is oil of Bergamot- a citrus tree native to Italy.

One study, by the National Cancer Institute and the Shanghai Cancer Institute of China, found that those who drink green tea on a regular basis – at least once a week for six months or more – have a lower risk of esophageal cancer.

Active principles in the tea leaves include catechins or polyphenols, a class of potent fat soluble antioxidants found in grapes, berries, onions and red wine that neutralize free radicals in the body that attack and damage healthy DNA causing a range of degenerative conditions.

Researchers from The University of Kansas measured the antioxidant content of green tea and found that it is 100 times more effective than vitamin C and 25 times better than vitamin E at protecting cells from damage believed linked to cancer, heart disease and other illnesses.

In July 1994, the journal Science News quoted a Rutgers University researchers theory that “all of the teas – green and black, regular and decaf – display antioxidant properties.”

If that isn’t enough to make you take the tea plunge, a research team at the University of California, Berkeley, found another substance in green tea, called hexanes, can help protect against cavities.

And while coffee has been linked to heart disease, no such link exists for tea. In fact, a study of tea drinkers in the Netherlands found that they had half the risk of fatal heart attacks. Experts credit compounds in tea called flavonoids that stop blood platelets from forming clots, much as aspirin does.

Green tea is recommended for those concerned with cardiovascular health, cholesterol reduction, and mental fitness.

It’s probably best to brew your own green tea fresh. Tests at Lipton Company show that tea retains 80 to 90% of antioxidants for at least 48 hours.

Storing homemade iced tea longer than that is not recommended — for food safety reasons. Remember to always store iced tea in the refrigerator. Before it’s brewed, however, the antioxidants in tea bags are stable, so you won’t get fewer antioxidants from using older tea bags. The taste, however, may be stale.

All teas should be stored in airtight containers out of direct sunlight so that they do not loose their flavor or take on foreign aromas. Be aware, also, that sweetened iced teas do contain added sugar — such as high fructose corn syrup — leading to higher calorie levels. Sweetened iced teas have the equivalent of up to 13 teaspoons of added table sugar per 16 oz bottle.

Also, teas contain caffeine, which can cause insomnia, nervousness, irritability and anxiety if used in excess. Studies have shown, however, that decaffeinated tea doesn’t lose its antioxidants, so decaf is ok in this respect. If you’re not a tea drinker, green tea extract capsules can provide the same health benefits. So, what will it be- coffee or tea for thee?

4 thoughts on “Coffee or Tea for Thee”