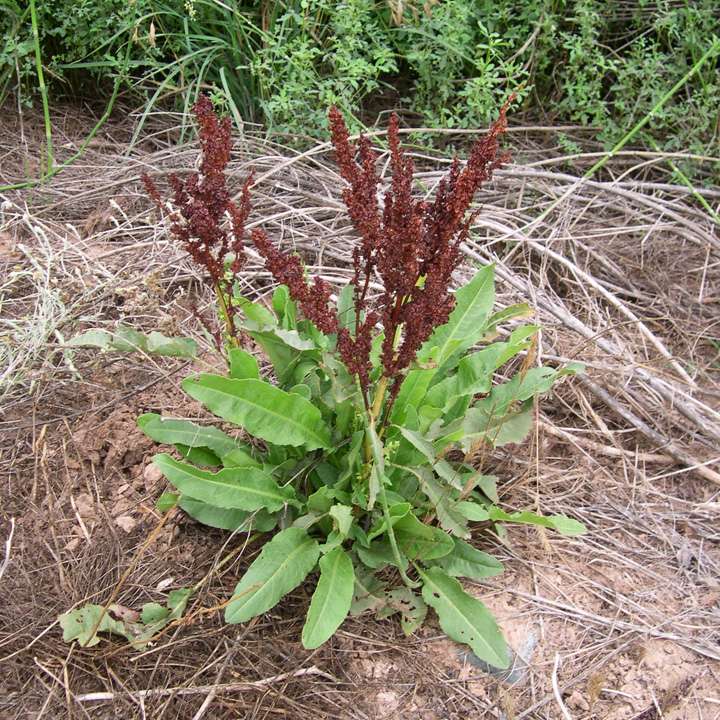 Yellow dock, Rumex crispus, is a common weed, found growing around wet places nearly worldwide. Native to Europe and north Asia, this herb is now considered an invasive alien in many places, including San Diego.

It is being removed from some canyons here in an effort to reestablish the plant populations to more native varieties. Fortunately for yellow dock, the effort is not fruitful.

The root of yellow dock is high in iron and is used in the treatment of anemia and for nourishing the spleen. It’s also combined with other herbs in herbal formulas treating sluggish digestion, skin eruptions, constipation, hepatitis and jaundice.

Digging them is like mining gold. If your shovel nicks the root, it reveals its yellow core. The yellow color is an indication of affinity for the liver.

Unlike most roots, which are generally harvested in the fall after the energy of the plant has receded back into them, the yellow dock root is dug in March. It’s an excellent spring tonic, helping to clear toxins that may have accumulated during the long winter.

The bitter taste of the root stimulates bile which improves elimination. They are also tonic and astringent, helping to tonify the lining of the small intestine to improve food absorption and fat metabolism

Yellow dock may be taken as a powder, in a tea or tincture, or in a syrup. The tea, administered in wineglassful doses, is made by pouring 1 pint of boiling water on 1 ounce of the powdered root. The syrup is made by simmering ½ pound of crushed root in a pint of water, sweetened, and taken in teaspoonful doses.

The root is also useful externally for skin cancers and tumors. I combine the alcohol extracts (tinctures) of yellow dock root, blood root and poke root in an emulsion for skin cancer.

Yellow dock root also makes an excellent salve for itchy, inflammatory skin diseases and swelling of glands. Its astringent properties make it useful in suppositories for treating bleeding hemorrhoids and as an abrasive dentifrice, especially in cases of spongy gums.

The eradication of this useful herb is part of a program to eliminate certain alien plants from our “natural” parks in San Diego. With its passing from these areas, will also follow other “aliens” targeted for removal, including fennel and eucalyptus. What I find interesting is that the native people here didn’t have a concept of alien. I mean, in reality we are also aliens. Invasive aliens.

What’s up with that.