Mugwort, Artemisia douglasiana, grows in tall abundant patches along the banks of the Russian River in Guerneville, California where we lived for a time while I attended my Professional Herbal Training Program in 1984.

I had been practicing herbalism for several years, but had not been introduced to this amazing herb. 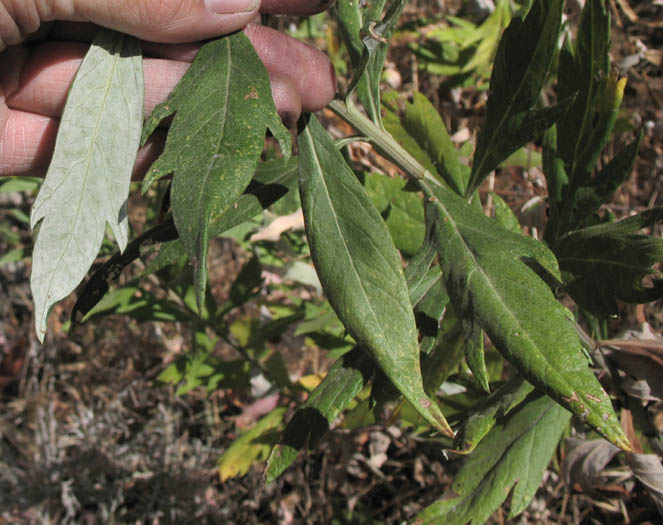 Inquiring about its properties and uses, I was informed that, among other things, it was traditionally used in dream pillows to produce vivid epic-length dreams.

Since San Francisco was too distant to commute for my usual employment as a stage hand, I decided to make dream pillows to sell at local stores to bring in some income to help pay our rent and feed the family.

As this was six years prior to the internet, a visit to the local library was required to research mugwort’s use in dream pillows.

This affirmed its long history as a psychic activator, stimulating the creative centers of the brain. I was also encouraged to include some other balancing herbs in the pillows to “guard against nightmares,” although I made no claims about producing pleasant dreams.

I always considered that to be a function of the dreamer’s state of mind as they slept. I chose Lavender to raise the spirit, Rose to open the heart, and Chamomile to relax the mind and body.

Some dream pillow blends include hops to induce sleep.

But dreaming ensues in the REM (rapid eye movement) state of the sleep cycle, which is very near waking, so I opted to leave this out.

I did ultimately make sleep pillows which included hops, but excluded mugwort.

Living in a dream pillow

I harvested bushels of mugwort and numinous bundles hung from the ceiling of our home to dry.

We would wake every so often during the night to recount our incredible dreams, so vivid you would swear they were real.

Subsequent research on mugwort revealed that it also had aphrodisiac properties, which explained much about our time in that place.

Our home had turned into a dream pillow, so I hung the drying screen for the fresh roses above our bed to soften the effect and placed double terminated crystals, “herkimer diamonds,” under our pillows to focus the dream energy.

In the ensuing years I made and sold thousands of dream pillows from mugwort wild-harvested in San Diego, with reviews ranging from “I couldn’t sleep with it in the house,” to “It changed my life.”

The only modification to the blend was to slightly reduce the amount of mugwort due to the complaints that it was too stimulating to actually allow sleep.

Note that if you use the mugwort of commerce, Artemisia vulgaris, more is required since it is much less potent than the mugwort, Artemisia douglasiana, that graces the West coast of North America.

Artemisia argyi (ChineseMugwort) has also been employed for thousands of years as moxibustion or moxa, for burning at acupuncture points to stimulate chi in the meridians.

In fact the word moxa derives from both the Chinese and Japanese name for mugwort, mogusa. Mugwort contains an essential oil and the volatile organic compound thujone, the active ingredient in ABSINTHE, a slightly mind altering narcotic derived from wormwood, Artemisia absinthium, and other botanicals. Thujone acts on GABA and 5-HT3 receptors in the brain.

Thujone is not water soluble so drinking a tea of Mugwort will not produce the same effect. If it is extracted in alcohol, it will.

It’s LIKELY UNSAFE to use Mugwort internally if you are pregnant as it might cause a miscarriage because it can start menstruation and also cause the uterus to contract.

Although the less potent Mugwort, Artemisia vulgaris, grows around the world, our local Mugwort, Artemisia douglasiana, can be found growing along roadways, rivers and streams in western North America, in the Western United States and into Baja California, Mexico.