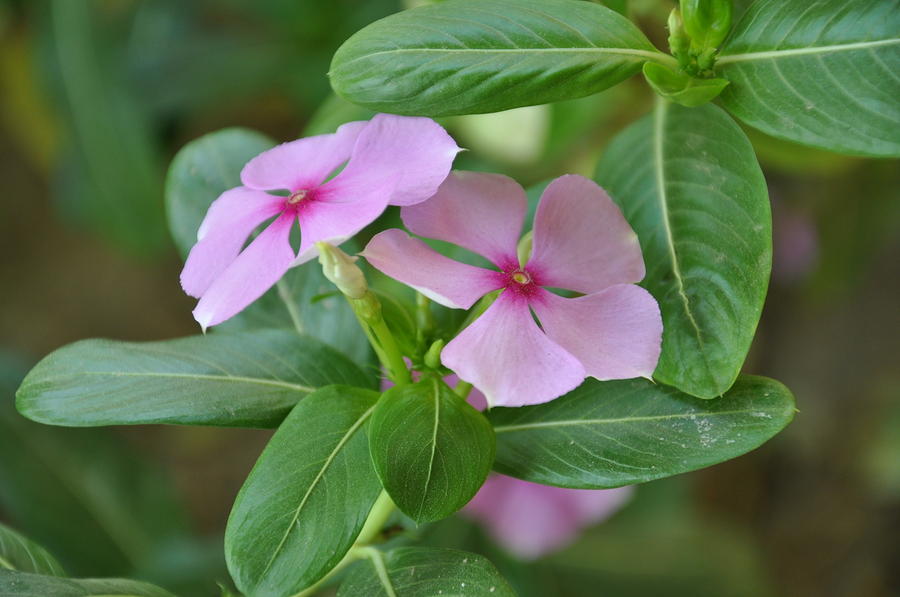 CNN coverage of the Gulf War impressed people around the world with the ability of weapons developed for the military to be directed against specific targets, while leaving the surrounding real estate intact. And while “smart bombs” must be the quintessential oxymoron of our modern age, I’ve always been struck by the ancient and inherent wisdom in herbs, and by their ability to provide intelligent and specific medicinal actions in the body. A single herb may raise or lower blood pressure (Cayenne), estrogen levels (Vitex), or nerve response (Valerian).

On a recent trip to Florida we were strolling in a park on Key Biscayne and encountered an amazing plant that is actually a “smart poison.” The Rosy or Madagascar Periwinkle, which is often grown as an ornamental, is a member of the genus Vinca which also includes the greater and lesser periwinkles commonly found throughout San Diego. Its plant family, Apocynaceae, includes many tropical trees and shrubs, a large number of which are poisonous, including our lovely Oleander.

In 1923, the Rosy Periwinkle, Vinca rosea, aroused interest in the medical world when it was found to have the power to cure diabetes, and was thought it may prove to be an efficient substitute for insulin. One of its alkaloids, vincristine, is currently employed in the fight against childhood leukemia. It acts as a mitotic spindle poison.

In mitosis, the process of cell division, the mitotic spindle helps to pull the two halves of the cell apart. Vincristine preferentially poisons the mitotic spindles in malignant cells in the process of dividing, while leaving normal cells alone. Periwinkle has a long history as a friend to man. Culpepper recommended it for nervous disorders, the young tops made into a conserve for the nightmare.

An ointment prepared from the bruised leaves has been used as a soothing and healing medicine for all inflammatory ailments of the skin, and is an excellent remedy for bleeding hemorrhoids. It has astringent and tonic properties. If you might hope that a smart herb might also make you smarter, periwinkle won’t disappoint you.

Studies in Germany have confirmed that the lesser periwinkle, Vinca minor, is one of the most powerful herbal cerebral vasodilators, opening micro-circulation to the brain.

Since ancient times periwinkle has been held in high esteem. It is considered a protector plant. Being also called “Joy of the Ground,” it was said to place one in a state of grace. It was worn as a garland or girdle to ward off misfortune.

While not at risk from car jackers, people of olde, mostly traveling on foot, were subject to inclement weather, robber bandits and predatory animals. Lions and tigers and bears, oh my! Grown near a gate or door, it was thought to keep away unwanted visitors. Another old name for it is “Sorcerer’s Violet.”

It was a favorite with the “wise folk” for making charms and love-potions. Old herbals tell of its potency against “wicked spirits,” having the power to exorcize evil and demonical possessions. The superstitions about it were repeated by all the old writers. It was said to induce love between man and wife.

In France, it is considered an emblem of friendship. Germans called it the “Flower of Immortality.” If you wish to grow periwinkle yourself, it is commonly found in nurseries. Just be sure to place it where it is well bordered as it tends to choke out other vegetation and will eventually stand alone in the allotted area.

As an apple a day keeps the doctor away, periwinkle at the gate keeps unwanted at bay. Shielded and ever prosperous in a state of grace, that’s smart medicine!