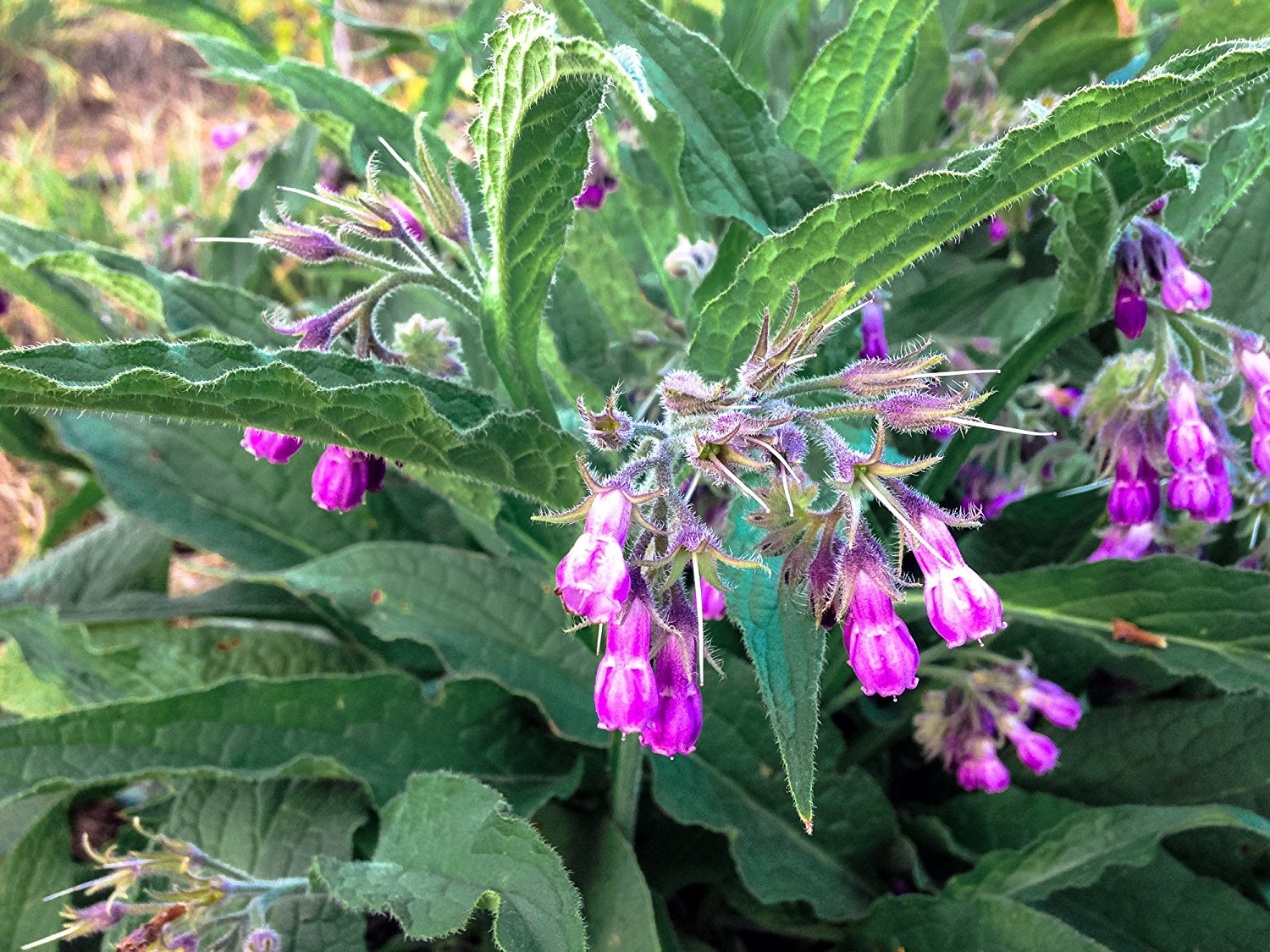 There’s Something About Comfrey

A tour of an herb garden to meet the plants and do some collecting is always an adventure. If the borage and comfrey are flowering, there’s a real treat for the senses- sweet and tasty flowers possessing a vibrant, yet simple, beauty.

Comfrey’s traditional names’ are knitbone, boneset and the derivation of its Latin name Symphytum is from the Greek symphis, meaning growing together of bones, and phyton, a plant.

The leaves aren’t bad tasting, although somewhat scratchy due to their high content of minerals, including calcium, chromium, manganese, potassium, selenium and silica, providing strength to the bones and connective tissues of any animal eating it.

Although no nutrient recommendations have been established for comfrey, research on silica suggests that it is essential for health. Deficiency induces deformities in skull and peripheral bones, poorly formed joints, as well as reduced cartilage and collagen.

Comfrey also contains much slimy mucilage which cools, softens and lubricates the tissues of the body, astringent tannins that tighten up spongy tissues and promote healing, as well as its powerful and well-known cell proliferant, allantoin, which is extracted for use in many body care products.

The Clan of the Cave Bear is an epic historical novel by Jean M. Auel about prehistoric times. In it she depicts the heroin, Ayla, a medicine woman, preparing a mastodon stew and observing how the slimy mucilage and astringent tannins from the comfrey root were drawing the cut up pieces of the beast back together, making it whole again!

While attending herb school in Sonoma County, we acquired our eggs from a local farmer that tended chickens, as well as a large healthy comfrey patch.

He’d cut the comfrey regularly and threw it out for the chickens to eat, which they did with much enthusiasm.

The shells of those eggs almost literally required a chisel to break open.

The young leaves have long been considered a good green vegetable, and have been consumed frequently by country people and their animals throughout the world, where it has been cultivated for its medicinal, as well as nutritional virtues.

This great healing herb is now under fire by “advisory experts” who are misleading the public, once again, about the safety of a popular herb.

So, what is all the commotion about comfrey being toxic?

Sale in the U.S. requires a label warning that it is for external use only.

Authoritative web sites warn that even topical use on open skin should be avoided because of the possibility of systemic absorption.

Studies are cited showing comfrey has caused liver problems in test animals. It is banned completely in several other countries (like Canada and Australia).

For the record, comfrey has never hurt any animal in any study- anywhere- ever.

Isolated extracts of trace alkaloids found in young comfrey leaves were concentrated and injected into animals in massive doses to intentionally cause liver damage, which would be expected since alkaloids are know for that when taken in high doses.

If you want to draw a comparative conclusion from this data, refrain from eating a dozen bushels of young comfrey leaves three times a day over an extended period of time. A warning such as this should be sufficient, if required at all.

Who’s got it in for comfrey?

It represents an herb that is gentle and yet powerful, like nature. It is part of nature.

So it can’t be patented and exploited by the powerful pharmaceutical action groups controlling much of our congress and other governing bodies worldwide.

It may be time for the American consumer to do a little fact finding of their own to discover what presents the greatest threat to our well-being, an herb like comfrey that will be here long after our civilization has choked on its own chemistry- or by misinformation willfully disseminated by those we’ve entrusted to protect us.

As more folks in our culture learn more about the wonderful herbs that grow around us and begin to realize what a boon they are to us, we can begin to embrace these gifts of nature as friends and allies, and not something to be feared.

It is said that as comfrey promotes vigorous cell growth in the body, it is also prolific in the garden, growing easily and quickly from the smallest piece of root left in the Earth.

It is generally available at your local nurseries and garden centers.

If you invite it to your garden, you will be greatly rewarded…

1 thought on “There’s Something About Comfrey”