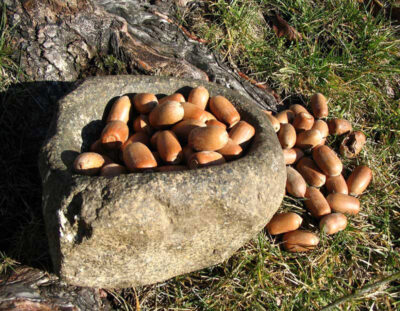 Before shopping there was gathering

There was actually a time when going out to get something for dinner did not entail making reservations at a restaurant or shopping. 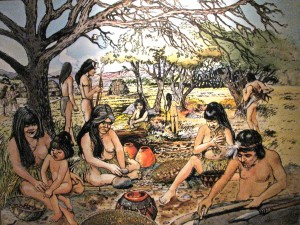 Southern California has always been a haven of good weather, and the good life. The Native Americans (Kumeyaay) in San Diego wanted for nothing before outsiders arrived. With an ideal climate, they cared for the land and in turn the land provided a bounty of crops, game, and medicine.

Traditional food sources such as acorns and pine seeds were smashed and ground into meal using a stone tool. Acorns were a staple food source of the traditional Kumeyaay diet. Oak trees were rarely cut down because they grew this important food source.

With little to no thought given to the hardship of survival, the Kumeyaay were able to turn their thoughts to ways to improve their life. Although our stereotype of “Indians” was that they were savages, this was a world of astronomers… horticulturists… healers… scientists… and storytellers….

And so it may be today for those who know how and what to gather. And so it will be when (the scientists assure us it is when, not if) the fragile distribution of goods gets disrupted by a flood, earthquake or other natural or man-made disaster.

When the stored food in the earthquake kit goes, who you gonna call?

It might be prudent to know a little something about gathering. Learning the local edible plants is the easiest way to know your way around gathering. There are a number of excellent references on edible wild plants, some with line drawings and photographs. There are plant samples at the Natural History Museum.

The SD Reader lists nature hikes that happen around the County. Some of the parks have Nature Centers with hikes and information on plants. It’s a good idea to check out plants at different seasons so we can recognize them when they’re bare and withered.

But even if you don’t know hemlock from fennel, a screening process can help. I wouldn’t gather in landscaped areas unless there was something there I knew for sure like natal plum (yum). Some of the best gathering of food plants such as watercress, yellow dock, wild celery and plantain will be found around water (look for sycamores, they grow around water).

Something that looks like salad fixings warrants a little taste. Hardly anything will harm if only a small amount is eaten. 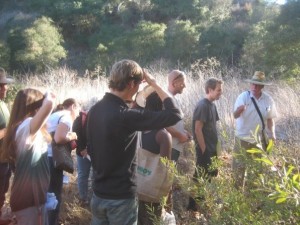 John Finch has been leading herb identification walks in San Diego for more than thirty years.

Even toxic plants can be safe in small amounts

If that doesn’t seem like salad, the Toxicodendron diversilobum (so-called poison oak) may. The natives would chew on a wad of leaves and apply to snake bites to draw the toxins out.

They fashioned the stems into baskets. Eating a bit seems to make one insensitive to the rather uncomfortable reaction to it. The young leaves taste pretty good but get more astringent as they mature.

If these greens don’t appeal there are some very good tasting and nutritious plants, and a number that will taste better when a few meals are missed.

The taste of a plant can reveal a lot about its nature. The more active principles in plants (alkaloids and glycosides) generally taste bitter. Some poisons taste kind of musty, like old gym socks. If the taste isn’t too bad, I eat a small amount and wait a few hours to see what happens.

The progression of toxic reaction normally starts with nausea, then progresses to dizziness, convulsions, loss of consciousness, and finally death. So if a little doesn’t harm, I try a bit more. Trying only one plant at a time establishes its potential for gathering.

It becomes a matter of what we eat, not if  we eat

We also have salt bush and pepper grass if you want to get fancy. Even the ice plant along the freeways can be eaten, although we generally try to stay away from auto pollutants near a roadway.

Some delicacies from the Old World

When Europeans settled here, they brought their favorite food and medicine plants.

Considered an invasive alien, Fennel thrives in our climate and can be found all over the county. The root bulb and leaves are also sold in health food stores.

Spring heralds the sour grass season. Brought to the New World on little wooden ships, Bermuda sorrel was a favored pot herb before the popularity of its fancy cousin, French Sorrel, drove it to obscurity. Spring also brings some delicate gathering plants like miner’s lettuce and chickweed.

The menu reads, “a savory blending of Native American and European flavors”…, and eating out takes on a whole new meaning….