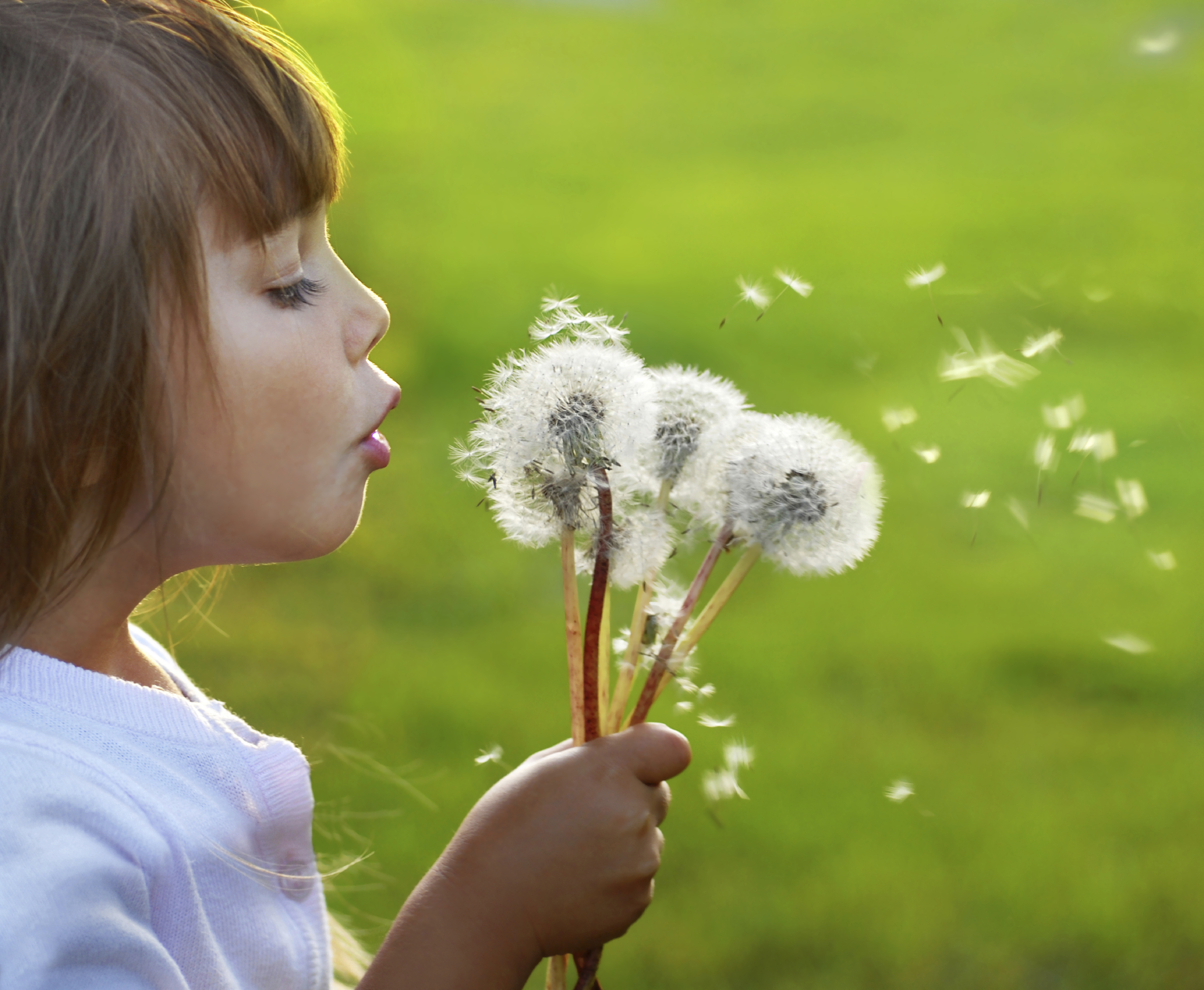 While in our herb garden the other day my daughter picked a dandelion that had gone to seed. She blew heartily till all the seeds flew off and floated away in the afternoon breeze. Remembering having done the same as a child, I inquired if she had made a wish. She had indeed. It made me think how funny it was that as adults we also have the task of keeping these pesky “weeds” out of our lawns. The children propagate. The adults eradicate.

A native to the Old World, this short member of the sunflower family has become well established in every temperate climate in the world. Its widespread distribution may be a hint from Mother Nature that everyone has need of it.

Although a relatively recent addition to the medicinal repertoire, dandelion has become one of the most widely used medicinal herbs in the world.

Its common name was apparently given by a 15th century surgeon who likened the cut of the leaf to a lion’s tooth, called in Latin Dens leonis. The botanical name, Taraxacum officinale, derives from the Greek taraxos (disorder), and akos (remedy), or good for what ails you, referring to its curative power. It is widely cultivated and harvested from the wild. All parts of the plant are useful.

The yellow composite flowers indicate the plant’s affinity for the liver and its capacity to bring joy to all who use it. They are lavishly supplied with nectar and are a favorite ingredient in herb beers and the famous dandelion wine. The white milky sap of the stem and root can be used as a topical remedy for warts.

The young leaves are a slightly bitter addition to salads acting as a digestive tonic. They supply an abundance of vitamins and minerals of great value to the nerves and blood. 20 ml of the fresh juice is taken three times a day as a diuretic. A less effective diuretic is made from a tea of the leaves.

The tincture is often added to remedies for failing heart to insure adequate potassium intake. The tap root of dandelion, much like a carrot, extends at least a foot into the Earth, drawing mineral energy. Roots are collected in Autumn of their second year. They are best left uncut as much of their medicinal virtue depends on the milky juice which would be wasted in bleeding.

A favorite liver stimulant with many herbalists, it is a cleansing tonic for problems including gallstones and jaundice. It clears liver congestion and will cure hepatitis in short order. It can be useful for constipation and toxic conditions such as joint inflammation, boils, abscesses, eczema, and acne. It aids digestion in the stomach and stimulates the pancreas and spleen. A curative starch, inulin, contained in the root is a safe remedy specific for hypoglycemia and diabetes.

Because of their high concentration of vitamins and minerals, both the root and the leaf are considered restorative and adaptogenic aids in building the body and restoring energy reserves. Not being poisonous, quite large doses may be taken. The roasted root makes a very agreeable coffee substitute and is often combined with roasted chicory, Chichorium endiva, which has similar properties. This “weed”, dandelion, may be the most beneficial plant in the world. Maybe it’s time we take a lesson from the children and experience the joy and cleansing this magical herb brings.