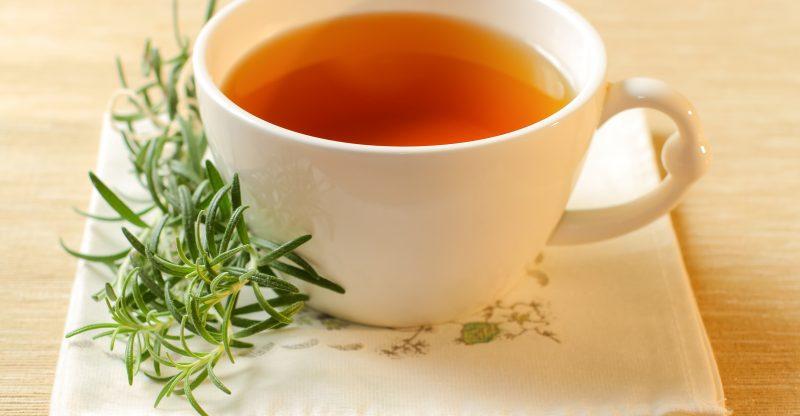 A shrubby evergreen herb graces our garden. It requires so little care that one may not give proper notice until beautiful blue flowers provide evidence of its royalty among plants. It holds a special position among herbs from the symbolism attached to its many virtues.

The name rosemary is derived from the Latin “ros“, meaning dew, and “marinus“, meaning sea.  This  probably stems from the fact that is native to seaside regions of North Africa and the Mediterranean. Hence the ancient legend that rosemary grows “where one can hear the sea”.

Rosemary (Rosmarinus officinalis) is a larger member of the mint family, all of which seem to have a double-edged effect on our physiology. They are at the same time stimulating and relaxing. I particularly enjoy a Rosemary bath to relieve sore muscles and joints after a few hours playing hoops outside on concrete. It’s also great in a footbath.

This is nothing new. Rosemary’s uses have been well known and documented since ancient times. It has a reputation for strengthening the memory. Due to this, it became an emblem of fidelity for lovers. It was used at weddings, but also funerals, and for decking churches and halls at festivals. An old French name, Incensier, refers to its use as incense in religious ceremonies, and in magical spells. It was a custom to burn Rosemary in sick chambers, and in French hospitals to prevent infections, and to purify the air. In Spain and Italy, it has been considered a safeguard from witches and evil influences.

The Spaniards revere Rosemary as one of the bushes that provided shelter to the Virgin Mary in her flight into Egypt. They call it Romero, the Pilgrim’s Flower. It has been said that Rosemary grows better in a garden where the mistress is master of the household.

A liniment formula dated 1235, said to be in the handwriting of Elizabeth, Queen of Hungary, is prepared by putting 1½ pounds fresh Rosemary tops in a gallon of white wine and allowed to stand for four days. She rubbed the liniment on her partially paralyzed arms, legs and feet until she was completely cured. We make the now famous “Hungary Water” with vinegar, rather than wine.

Rosemary is also great for the hair and scalp. It stimulates growth, imparts a pleasant odor and color, and helps prevent dandruff. Rosemary tea, made by steeping the young tops, leaves and flowers in warm water is a good remedy for headache and nervous depression, colic and colds. Since some of Rosemary’s important medicinal constituents are aromatic oils, it is best to steep it with the lid on the pan to prevent their escape.

Rosemary also contains high concentrations of minerals such as calcium, magnesium, phosphorus, sodium and potassium. The electrolytic balance of fluids surrounding the nerves and cardiac tissues relies on these minerals.

One primary use is the lowering of blood pressure. The flavonoid pigment diosmin in Rosemary decreases capillary permeability and fragility, contributing further to cardiovascular health. In Germany, among doctors still practicing natural medicine, Rosemary is considered a valuable remedy during a convalescence and during old age for quickening and quieting circulation, for rheumatism and for neuralgia.

So much has been written through the millennia extolling the virtues of Rosemary, it is a challenge to give it justice in a few paragraphs. Perhaps the most famous quotation, from Shakespeare’s Hamlet, is both a tribute to this revered herb and a gentle reminder that we not overlook it, “There’s Rosemary, that’s for remembrance.”